A white father called police on a black man. Both men speak out

The video shot by Wesly Michel on July Fourth and widely shared on social media has sparked a larger conversation on race as both men give their perspective on the confrontation.

In the footage, the white man identified as Christopher Cukor demands that Michel, who is black, leave the property after he said he was meeting a friend.

After days of backlash, Cukor wrote in a statement posted on Medium on Tuesday that he did not target Michel due to his race, but reacted based on his past. His father was killed when he confronted a trespasser outside his home, and "past experiences and fears" can cloud someone's intentions, he wrote.

"For my child's safety, my safety and that of the building, I felt it was necessary to get help in this situation," he wrote. "Furthermore, I've encountered trespassers in my building and we've been robbed several times. This is not uncommon in San Francisco and the bad actors are all different colors."

Michel, 35, a software engineer, said people should not judge others based on past experiences.

"The fact that he had to have interactions with other minorities in his life and still treated me that way, shows me that he has not evolved from that," Michel told CNN's Don Lemon on Tuesday night. "He's still hurt from that."

While Cukor is understandably traumatized by his father's death, Michel said, he should not let those experiences cloud his view of others.

"Personally, I am African-American and I have been stopped and harassed at stores and different locations and I have police officers asking me if I belong there or even in my apartment complex ... people randomly telling me that I don't belong at that location. But, I don't let those experiences shape or define the way I see other people," Michel said.

Such experiences should be an opportunity for learning, not exposing your biases, he said.

"My responsibility is not to make everyone around me feel comfortable. It is very important that people understand that. I should be able to walk around freely and not feel that I should constantly prove that I am not a threat to the people around me," Michel said.

Michel said one key question Cukor should ask himself is whether he would have acted the same if Michel were white.

"It is important for people to understand when you call a police officer on an African-American, it is completely different than someone calling a police officer on someone else. To me that's a death threat. ... I can literally die from that altercation, and I would just simply be another hashtag in the news or on Twitter. It is important that people understand that," Michel said.

CNN has attempted to reach Cukor but has not heard back. In his written response, he said, he understands Michel was reacting based on his unique history as well.
"Unfortunately, there is a terrible pattern of people calling the authorities regarding people of color for no other reason than their race," Cukor wrote.

The video and a son's plea

Cukor said he was on his way out and noticed Michel caught the door and entered the building without using the callbox. He said he asked where he was going -- and would ask any other person a similar question.

The video begins as Cukor asks Michel to identify the person he is there to see and to "please call your friend on the call box and have them come down and get you.

Cukor appears to be holding open the door to the building during the conversation, and he tells Michel he's going to call the police.

"Daddy, don't!" the child says as his father pulls out his cell phone. 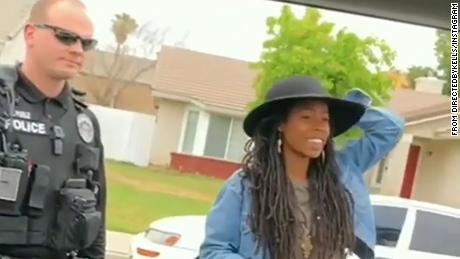 Michel reminds Cukor that he is being recorded.

"You're just gonna be the next person on TV, just remember that and you have your son with you," Michel tells Cukor, alluding to viral videos in which police were called on black people for mundane things like taking a phone call in a hotel lobby, waiting for a friend at Starbucks or working out at a gym.

During the call to police, the father says Michel is a "trespasser," who "tailgated" into the building, walking in as he was walking out.

The boy cries as his father describes Michel to police. "Daddy, I don't like this. Let's go," he says.

Michel tells him to listen to his son and walk away, and he'll stop recording. While Cukor is on the phone, Michel's friend arrives -- and appears to come from outside the building.